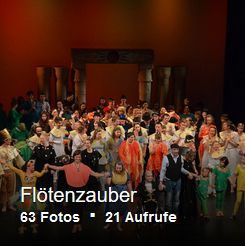 World premiere in April 2019 at the Theater Akzent in Vienna

Tobias and Paula, two young people living with disabilities, are involved in the production of “The Magic Flute” as a dance theatre piece. The two of them identify particularly with the roles of Prince Tamino and Princess Pamina. They too often feel trapped, duped and have to show courage. But through the power of love everything seems to succeed. Reality and play intertwine more and more and the (flute) magic of the famous opera, spreads over the lives of the two protagonists.

With over 110 dancers with and without handicap of the “I am O.K.”. Dance studios, students of the Thereasian Academy and from the Komensky School Association, students of the MUK Private University, the Vitalakademie and the Dance Education Vienna. 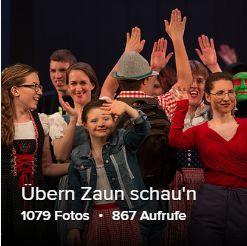 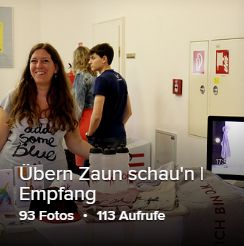 (Looking over the fence)

World premiere in April 2017 at the Theater Akzent in Vienna

Three friends set off to explore what lies behind the mysterious fence that has bounded their small village for centuries. On their wanderings through unknown places, the travellers meet people who are completely different and express themselves in a completely different way than the three of them have known up to now. Will the children succeed in finding a common language and making friends despite the many differences?

With a total of 140 participants, including dancers with and without disabilities of the “I am O.K.”. Dance studios, students of the Vienna Music Schools and the Theresianum Grammar School, students of the MUK Private University Vienna, the Vitalakademie and the Vienna Dance Education. 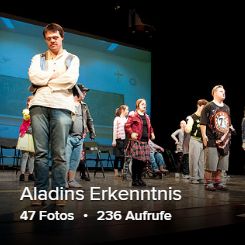 Directed by Hana and Attila Zanin
in collaboration with Johnny K. Palmer

Worts premiere in April 2015 at the Theater Akzent in Vienna

The figure of Aladdin represents a young person who has not yet found his place in society. With the help of a miraculous mobile phone app, he conjures up a djinn who fulfils his every wish. On his journey through foreign worlds and by meeting different people, he realizes in the course of the play that he can’t achieve true friendship and true love by just a few clicks on his smartphone. In the end, the most joyful thing is what succeeds on its own. 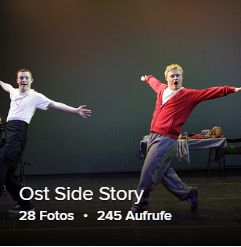 World premiere in April 2013 at the Theater Akzent in Vienna

After William Shakespeare’s „Romeo and Juliet“.
The core of the story is the tragic love of two young people of different nationalities. Through Rosi and Milan old-established Viennese (“Havara”) meet immigrants from the former Eastern Bloc (“Heroes”). Different mentalities and cultures collide and between the two groups there is initially intolerance, rivalry and hatred. But in the course of the play it becomes clear to everyone that a content and equal life can only be achieved if there is a respectful coexistence between all ethnic groups. 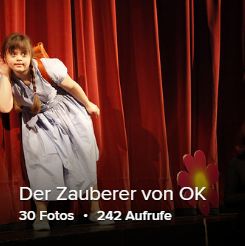 (The Wizard of OK)

Directed by Hana and Attila Zanin
in collaboration with Brigitte Karner

World premiere in March 2012 at the Theater Akzent in Vienna

After the Hollywood „The Wizard of Oz“
On a hike with her parents in the mountains, a hurricane seizes young Dorothy and carries her into the magical land of OK. Desperate, she sets off for the Emerald City, where the powerful wizard of OK lives – only he can enable her to return home. On the way she meets a scarecrow who wants brains, a tin man who wants a heart, and a frightened lion who wants to be brave.

90 dancers with and without handicaps have been thinking about planet earth: from the history of creation, through an often not so good relationship between humans and nature, to the hope that children will better care for and appreciate the blue planet in the future. In eleven scenes with dance and music the artists show in varied choreography what they have to say about this current topic: Animals, plants, the first humans, greedy giants and finally the view of a hopeful future can be seen on stage.

In the full-length performance “Das tanzende Haus – 30 Jahre ‘Ich bin O.K.'” the audience is taken on a journey through time and experiences how a small dance group has grown into an association with more than 80 members. In twelve scenes, around 70 dancers will tell the moving story of the association – from its difficult beginnings to the flourishing present. The dancers will show how, over the years, they have discovered ever new skills and how new dance groups have emerged within the association.